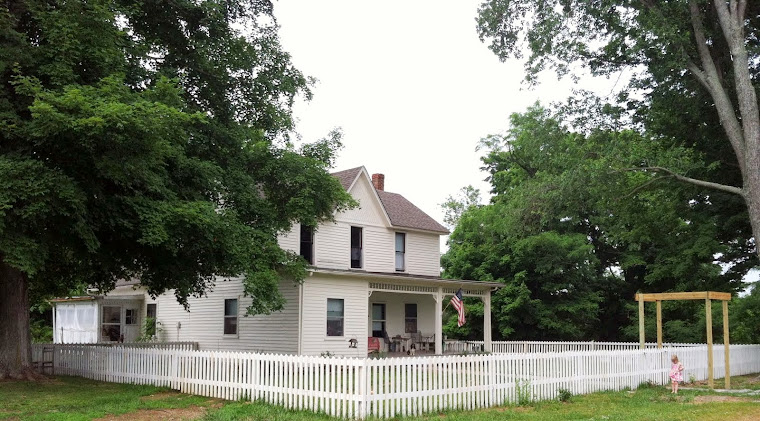 This is the first time I've actually sat down and posted anything on our blog.  I usually leave that to the writer in the family but I thought I'd take a few minutes before the day gets going and while everyone is still happily sleeping to share some thoughts about our trip across the country and arrival here in Pekin.

First, I want to thank everyone that helped us load the truck and finally get on the road in California.  I couldn't tell if you all did such a fantastic job because you wanted to help or you wanted me outta there... I'm going to go with the former :-).  We really appreciate all of your help and couldn't have asked for more.  We left California about noon on Sunday, truck loaded to the back door and all pets in tow (literally).  We put the dogs and cat beds in Ann's car and it was towed behind the truck.  We idled the car and ran the AC a couple of times while in tow when it got too warm but the majority of the time it was mild and just the windows down was enough.

Because we didn't leave until noon we arrived at our first stop late on Sunday.  Ann had to wake Bonnie up to check into the motel and that was not a good thing.  The first day was 9 hours of driving and Bon-Bon was a little out of sorts.  But, she settled down and after that first day she got in the "groove" and did a great job.  Unfortunately, there was a casualty on our first day:  The ladder that was strapped to the rack on my truck vibrated and made a noise that drove Ann and Bonnie crazy... It was left behind a building near a liquor store in the California desert... Rest in peace big guy!

There were so many beautiful places that we saw as we drove.  I would recommend to anyone that has the chance to take a road trip across our country.  It is an amazing place.  The contrast as you move from the mountain west to the desert southwest to the wide open plains and back into the low, rolling green hills of the east is something everyone should see at least once in their life.  Even though I had made that same trip a number of times while trucking, it was a new experience and one that I won't ever forget.

We were a day behind the big storms that tore across the midwest (Thank You God!!) and were able to see some of the devastation.  It was a powerful experience.  To see the destruction on both sides of I-40 where the tornado crossed the interstate was breathtaking.  In Joplin, Missouri the tornado was nearly a mile wide and was on the ground for over 6 miles.  It crossed over I-44 and the destruction was total and complete.  As we approached we began to see bent highway signs and light debris, a little farther on broken highway signs and more debris, then missing highway signs and huge amounts of debris and then total and complete destruction.  It was heartbreaking and inspiring as well.  Every community was sending aid of all sorts.  We stayed in Springfield Missouri the night after we went through Joplin and the talk around the hotel and town was about getting down to Joplin and helping out.  It was humbling.

The biggest event of the trip was the break down in Oklahoma city.  Our truck had been giving us trouble all along the way.  It was losing coolant and had to be "topped off" a couple of times a day.  But once we got to Oklahoma City it had to be replaced.  So, Penske (more on them later) sent out another truck and car hauler late the night we arrived.  The next morning they sent a "swap crew" to unload our stuff from one truck and put it in another.  It took about 3 hours and went fairly smoothly.  Unfortunately, Nick and I didn't leave OKlahoma City until about 1 pm.  Consequently, we had a late night.  Ann and Bonnie left before us so they had a slightly shorter day.

We arrived in Pekin right on schedule.  We had to go to the house to get the keys to our apartment and give Ann her first look at the place.  I won't try to speak for her here but to say that she was overcome with emotions and fell in love with our house as soon as she drove onto the property.  Some of the neighbors stopped by right away and we had our first official "welcome" to Pekin.  Our local unloading help was great and everything went pretty well.  It was very hot (93 degrees) and very humid.  We all worked hard and slept well that night.

So we are here and we are getting our feet under us.  With it being a holiday weekend we weren't able to get our phone, cable or internet (yes, they have those here) set up but today it will all happen.  It is time for us to get organized and get a plan so that is what the rest of this week is all about.

Thank you all for your prayers.  We were blessed to be behind the bad weather and blessed to have such a smooth move (sans Penske, more later I promise).

Take care and stay tuned... It will be worth reading, I promise.

Getting Ready for Our Big Move

We are to within weeks of our BIG move across the country to our farmhouse, which is why we've been quiet. Just packing and talking about what to do first.

Our restoration schedule depends a lot on the state of the current insulation in the walls. The very first thing we will do is check to see if the blown-in stuff shows any signs of moisture. We have no idea when it was done, so it is really a mystery until we get there and check it out. Even if it appears to be ok, I'm still thinking about putting in something more permanent and reliable like closed-cell rigid foam so we don't ever have to worry about it. With blown-in cellulose, I would think it is not meant to last forever anyway. If we decide to go ahead and remove the cellulose, that will surely mean we take down the plaster, which is another issue we are weighing.

The other big question we have is whether or not we can use the existing septic system. The county has no record of it, the seller told the neighbor it was condemned, but a contractor I spoke with doesn't think that is true. We may be digging down to it to inspect it. Trust me, I will NOT be anywhere in the vicinity for that stinky event! LOL   I will take K's word for it.  Worst case, we hook up to the city sewer, which is ultimately my preference even though the most costly one.

We have thankfully come to agreement about general kitchen style! Whew! Initially, I was thinking white cabinets with butcherblock countertops. I've always loved quartersawn oak, K said he would prefer a darker, more cozy kitchen so we are going to go with dark cabinets. AND K wants us to make them. I love how industrious he is and that he truly is capable of making them!

Here are some QS Oak kitchens that I think are awesome: 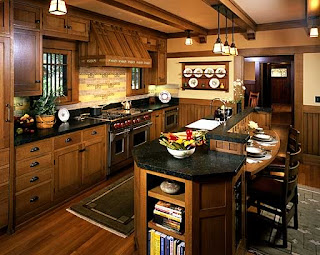 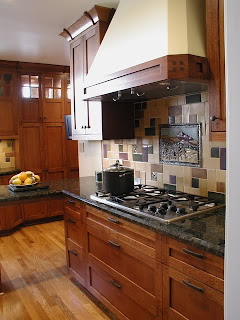 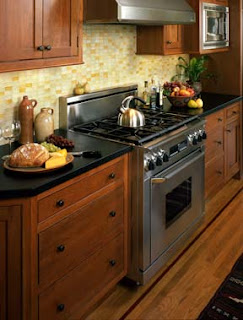 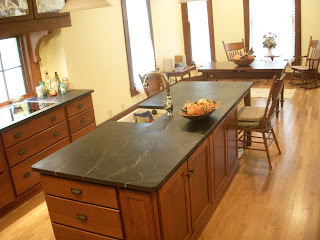 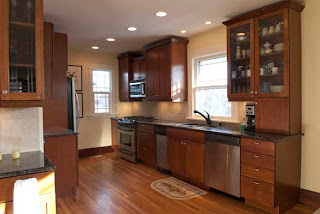 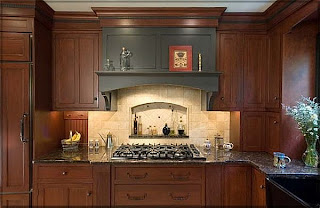 Solid black soapstone countertops would be fantastic too. And if we are making the cabinets, I think we'll be able to budget for the soapstone.
Posted by Kevin and Ann at 2:13 PM 3 comments: 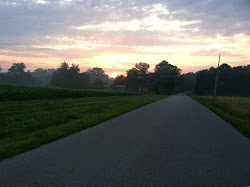 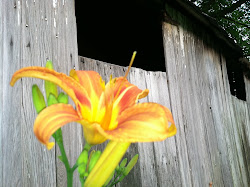 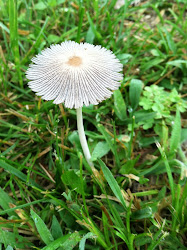 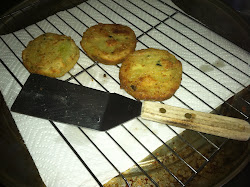